According to the World Gold Council’s Q3 Gold Demand Trends report, global official gold reserves rose by 22.8t on a net basis. Q3 2020 was the first quarter of net sales since Q4 2010, mostly as a result of the hefty sales from Uzbekistan and Turkey. This encouraged a re-concentration in gold demand of the central bank and whether this would change the mindset towards gold accumulation. 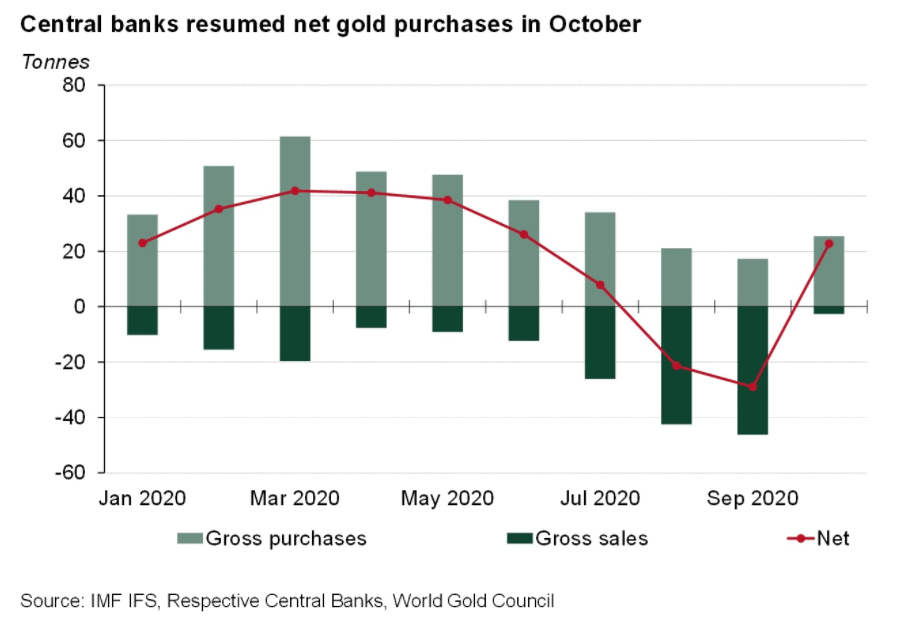 This year, gold has outperformed most of the traditional reserve assets and provided central banks with the extra power needed to make markets and currencies stable amid unprecedented levels of uncertainty. While it is expected to see some sales, considering gold’s position as a safe and liquid asset, the continued accumulation by central banks emphasises the important role of gold to central banks portfolio.

According to report, gross purchases of gold totalled 25t in October which mostly was by five central banks: Uzbekistan (8t), Turkey (7t), UAE (6t), Qatar (2t), and India (2t). On the other hand, gross sales were just under 3t during the month, mostly by Mongolia.

Y-t-d, central bank net buying continues to be between 200-300t. So far in 2020, number of buyers were more than sellers and most of buyers came from countries which largely have low ratios of gold-to-total reserves, indicating a continuous appetite to increase holding of gold assets at a strategic level.

©2021 Liemeta ME Ltd. All rights reserved.
Powered by