A new analysis from the World Gold Council, identified September as one of the best months for gold. The analysis shows that gold has delivered positive returns during the month of September “with a confidence level” of nearly 90%.

“September has been one of the strongest months historically for the price of gold, and this could present an opportunity for investors as we head into the fourth quarter of the year,” according to the World Gold Council’s report.

Strong physical demand and rising investment activity are the two key drivers of this upward trend. In October and early November 2020, there was a surge in demand due to the Indian wedding season and other celebrations, as well as increased global investment activity after the traditionally slow summer months. As a result, September is a popular season for investors to add gold to their portfolios. 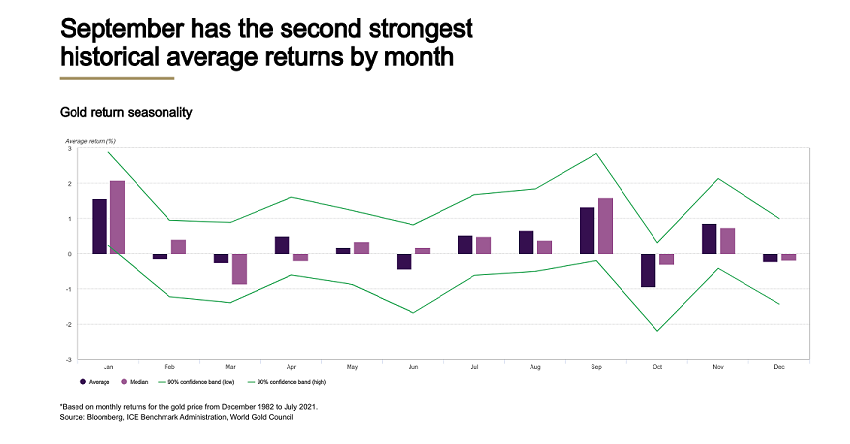 In early August, real government bond yields as measured by the US-10-year TIPS yield reached all-time lows, which is usually a positive for gold as its opportunity cost improves. Despite the close link in recent years, the gold price has tended to lag this trend at times, as was the case in August. This was likely because of a stronger US dollar. We wouldn’t be shocked if gold price rises should real rates remains below -1%, especially since the month-end jobs report was poor.

Despite all the volatility, the precious metal ended August down 0.6% on the month and 4% down on the year.

According to the report, Global financial markets were rather quiet during the month, as is typical for August, with most stock markets drifting higher on lighter volumes. Momentum considerations, led by ETF outflows and a reversal from the strong July gold return, as well as moderately higher rates, drove the minor drop in gold prices in August. Follow-through from July’s interest rate cuts helped to mitigate their negative impact. Despite the flash crash on August 9th, gold ended an otherwise uneventful month resiliently flat.

As noted in the report, the key factors behind the flash crash, are low liquidity and technical positioning. This occurred at a time when global markets were experiencing less liquidity across all asset classes. Also, there were a number of technical factors that could have caused this quick sell-off. First technical reason is the recent ‘death cross,’ in which the 50-day moving average dipped below the 200-day moving average, signalling a negative trend. The second technical factor is the early sell-off certainly initiated some stop-loss orders around the US$1,700 level, generating a snowball effect that resulted in increased selling.

Among all of this, one of the primary messages for investing in gold is the principle of gold as a store of value and the fact that the purchasing power of fiat currencies decline significantly in recent years, a trend that has continued from the last century, said the World Gold Council.

Impact of inflation on consumers

The US Federal Reserve (Fed), the European Central Bank (ECB) and other central banks have classified the recent increase in inflation as temporary. However, some of strategists from different financial institutions such as Invesco, JP Morgan, and Morgan Stanley, have argued that inflation may be here to stay.

“There are some clear less-talked about examples of inflation. ‘Shrinkflation,’ or the idea that you receive less of something for the same price (a nifty way around price increases) has become more common. So-called ‘hedonic adjustments,’ often in the context of electronics where the price of goods is adjusted down to reflect innovation – such as increased functionality or processing capacity – create a deflationary effect, despite the fact that the total amount spent by consumers may remain the same or potentially increase,” stated in the report.

Inflation is the reason why gold is on the radar of big institutional investors, according to the World Gold Council, which said that higher price pressures are already hurting consumers.

While central banks may see inflation as temporary, consumers – and investors – may have a different opinion. This could lead to increasing allocations of real assets, such as real estate and TIPS, as well as commodities, such as gold, which have performed well in higher inflationary circumstances.

©2022 Liemeta ME Ltd. All rights reserved.
Powered by